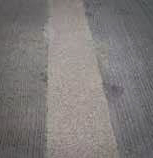 In the Spring of 2005 Shelly and Sands, Inc. contacted Crafco to evaluate several failed areas of an armorless bridge joint placed in 2004.

The failed bridge joint was comprised of elastomeric headers and a poured in place urethane seal. The mode of failure was attributed to improper placement of the joint system. The joint was not maintained between the headers resulting in a monolithic pour of the opposing headers.

Additionally, the bottom of the joint block-out was not properly leveled as required by this type of a system and proper surface preparation appeared to have not have taken place. It was determined that the existing block-out would not be conducive to a successful reinstallation of the same joint system because to properly flatten the joint bottom would result in an extremely deep block-out.

As an alternative repair method, Crafco TechCrete was proposed. TechCrete could be placed in the existing block-out and because of the flexibility of the material, the bridge joint would not need to be maintained through the TechCrete. TechCrete could be poured in place the full width and depth of the blockout. It was also determined that for intermittent repairs across the joint length, Techcrete would bond well to the existing system. Installation of TechCrete would be significantly quicker.