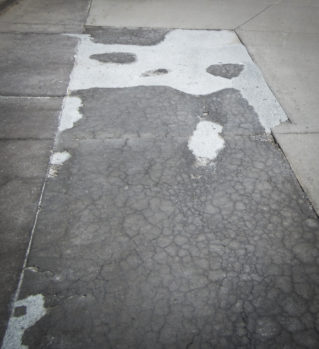 The Regional Transportation Department (RTD) for the City of Denver encountered many corner breaks and potholes in their concrete roads due to the heavy bus and light rail traffic in the area.

Chris McLuhan, with RTD, has tried epoxies and other methods to remedy the problem. He decided to research a fix to his problem by turning to the Internet. He came across the Crafco product, HP Concrete, during his search. Chris spoke with DISSCO and started purchasing bags of HP Concrete for all of his park and rides.

Light rail started having problems in downtown Denver and Chris suggested HP Concrete for their problems as well. Buses go over these products, but the product downtown also has the vibration of the light rail. The average size of the holes were about five feet wide by eight feet long and deep enough to show the rebar.

The other issue that Chris was facing was the amount of Magnesium Chloride (Mag Chloride) that was used before he started at RTD. Mag Chloride is used to de-ice the roads during the harsh Denver winters.

Since the implementation of HP Concrete, Chris has said that the amount of Mag Chloride used by RTD has been cut down by 80%.