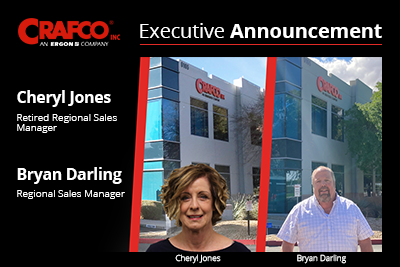 On January 1, 2021, after 38 years of service, the senior leadership team of Crafco, Inc. announced the retirement of Regional Sales Manager, Cheryl Jones.

“From being hired as a customer service representative, working her way up in our sales organization into outside sales and advancing to become a regional sales manager, Cheryl by far succeeded in a male-dominated industry,” stated Don Brooks, President of Crafco. “Cheryl’s development and rise over the last 38 years has been truly remarkable. Without question, she will be missed,” he added.

Jones began what would become a remarkable career with Crafco when the company was quite small in February 1983 as one of two customer service representatives serving all of our customers from our single location in Chandler, Arizona. Soft spoken, but with an unrivaled determination and dexterity, Jones quickly rose through the ranks as an Inside Sales Representative expanding Crafco equipment and materials, to an Outside Sales Representative where she continued to promote the Crafco brand from west of the Mississippi and into Canada. In addition to furthering the brand, Jones was responsible for the sale and promotion of Crafco’s concrete products for the entire U.S. and eventually became the Manager for Specialty Products for both asphalt and concrete. Over the last six years, Jones has been responsible for a team of five as the Regional Sales Manager for Texas, Mississippi, Louisiana, Arkansas, southern Missouri, and western Tennessee.

“As the day nears, the thought of retiring becomes ever more difficult to fathom. It’s never easy articulating what it feels like to leave a great company and family that you have been a part of for so long. Having said that, I would like to begin by thanking Don Brooks for welcoming me into the Crafco family all those years ago. I would also like to thank Tom Kelly for guiding me during my later years at Crafco. To all the individuals who have helped me advance into each new arena during my tenure, thank you from the bottom of my heart. Last, but surely not least, to my amazing sales team in the southcentral area and all the wonderful individuals in operations, thank you for growing and developing the territory into what it is today. You cannot imagine how much I will miss you all. To my good friend and incredibly wise colleague, Bryan Darling, I wish you all the success in growing the business,” she added.